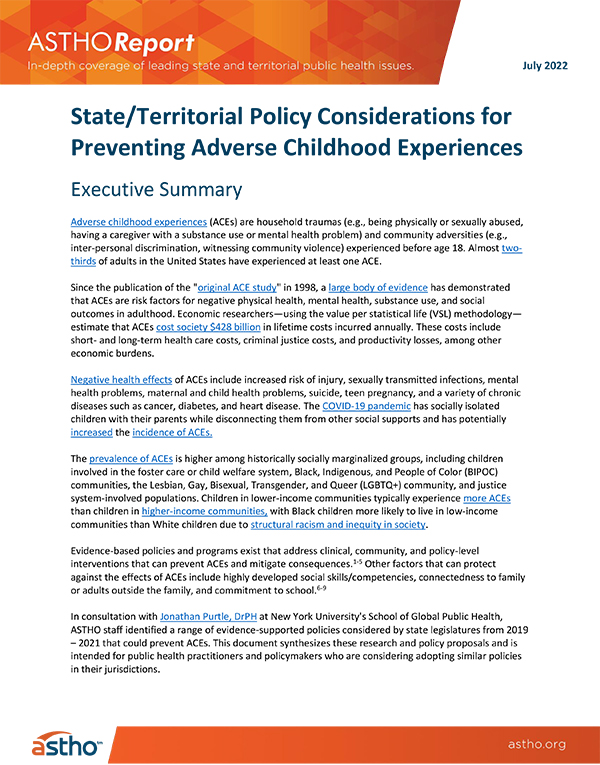 Adverse childhood experiences (ACEs) are household traumas (e.g., being physically or sexually abused, having a caregiver with a substance use or mental health problem) and community adversities (e.g., inter-personal discrimination, witnessing community violence) experienced before age 18. Almost two-thirds of adults in the United States have experienced at least one ACE.

Since the publication of the "original ACE study" in 1998, a large body of evidence has demonstrated that ACEs are risk factors for negative physical health, mental health, substance use, and social outcomes in adulthood. Economic researchers—using the value per statistical life (VSL) methodology—estimate that ACEs cost society $428 billion in lifetime costs incurred annually. These costs include short- and long-term health care costs, criminal justice costs, and productivity losses, among other economic burdens.

Negative health effects of ACEs include increased risk of injury, sexually transmitted infections, mental health problems, maternal and child health problems, suicide, teen pregnancy, and a variety of chronic diseases such as cancer, diabetes, and heart disease. The COVID-19 pandemic has socially isolated children with their parents while disconnecting them from other social supports and has potentially increased the incidence of ACEs.

Evidence-based policies and programs exist that address clinical, community, and policy-level interventions that can prevent ACEs and mitigate consequences. Other factors that can protect against the effects of ACEs include highly developed social skills/competencies, connectedness to family or adults outside the family, and commitment to school.

In consultation with Jonathan Purtle, DrPH at New York University's School of Global Public Health, ASTHO staff identified a range of evidence-supported policies considered by state legislatures from 2019 – 2021 that could prevent ACEs. This document synthesizes these research and policy proposals and is intended for public health practitioners and policymakers who are considering adopting similar policies in their jurisdictions.