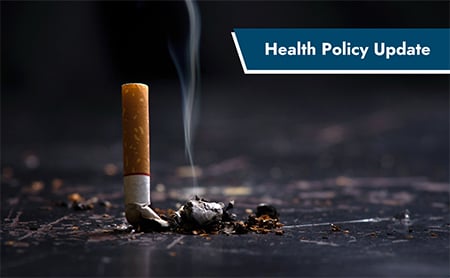 Although cigarette smoking in the United States is declining, tobacco use is still the leading cause of preventable death, responsible for approximately 480,000 deaths annually—approximately one in five adults. Jurisdictions can disincentivize tobacco use, and support tobacco cessation, by adopting evidence-based legislative and regulatory policies. ASTHO’s 2019 Chronic Disease Prevention and Control Technical Package included several evidence-based policy actions to reduce tobacco and nicotine usage.

Over the past several years, jurisdictions have continued to implement important policies to reduce tobacco and nicotine use, including increasing tobacco prices, expanding areas deemed “smoke-free,” limiting the sale of flavored tobacco products, and supporting tobacco cessation programs. Additionally, jurisdictions considered proposals to pre-empt local government action on tobacco policies with many protecting the right of local government to enact stricter tobacco policies.


* This update has altered the categorization of tobacco pricing policy to now assess tax on cigarettes and e-cigarettes separately, rather than on all tobacco products.

At least 22 states, Washington, D.C., Puerto Rico, American Samoa, the Commonwealth of Northern Mariana Islands, and Guam have cigarette excise tax rates of $2.00 per pack or higher at the end of 2021. Additionally, 30 states, Washington, D.C., Puerto Rico, and the U.S. Virgin Islands (USVI) have a tax on e-cigarette products, an 83% increase from 18 jurisdictions with e-cigarette taxes effective in 2019.

Virginia enacted HB 1199, clarifying how tax on cigars and pipe tobacco products should be administered to online retailers. The Alaska legislature passed SB 45 in May 2022, which would have established an excise tax on electronic smoking products and raise the minimum age of sale to 21. This measure was vetoed in September 2022.

Massachusetts became the first state to adopt a statewide flavor ban on all tobacco products in 2019. Additionally, California, Rhode Island, New Jersey, New York, and Washington, D.C. have enacted flavor bans or restrictions on at least one type of tobacco product. California enacted SB 793 in 2020, restricting the sale of products including menthol cigarettes and fruit-flavored vaping liquids, but the implementation had been delayed pending the outcome of the veto referendum. California voters considered whether to uphold or veto the law in November 2022, with a majority of voters approving the ballot measure (Proposition 31) and upholding the legislation.

State governments are granted significant powers to protect the health and safety of its residents. Powers granted to local governments (e.g., counties, cities, and towns) are determined by the state government. Generally, state actions to prohibit local governments from acting on an issue is known as preemption. As of July 2022, at least 14 states preempt local smokefree air laws in some way, ranging from preventing all local smoking and vaping legislation to prohibiting local laws from designating specific places smoke-free (e.g., restaurants and bars). Recently, Idaho enacted S 1285, to prohibit local governments from adopting additional regulations on the marketing, sale, or taxation of tobacco products or electronic smoking devices.

As new state and jurisdictional legislative sessions begin in 2023, we can expect tobacco control to remain on the minds of lawmakers. ASTHO will continue to monitor this important public health policy issue.

Please refer to the 2022 Tobacco Control Network Policy Recommendations Guide for a comprehensive, evidence-based approach to advance progress in enacting each of the above essential policies.